What is a roundabout?

Roundabouts have the potential to reduce collisions, traffic delays and fuel consumption resulting in improved air quality through reduced vehicle emissions.  Roundabouts may be single or multiple lane – the Tyson Road roundabouts are planned as single lane.

How do roundabouts affect traffic flow?

Because approaching traffic only has to yield to vehicles already circulating in a roundabout, movement is often without delay. Roundabouts have proven to move traffic through an intersection at a much higher rate than traditional intersection controls.

How do roundabouts affect safety? 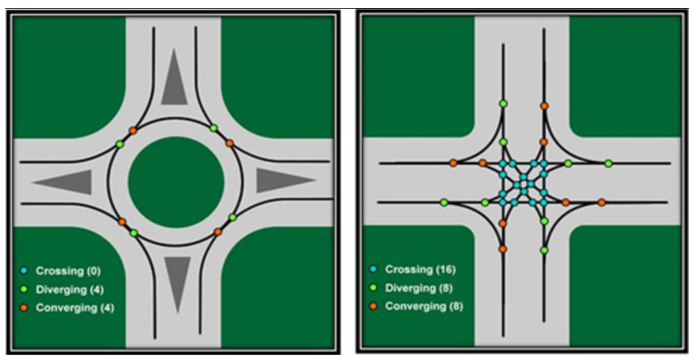 A 2012 review of safety studies indicates that injury collisions have been found to be fewer in number and less severe for a roundabout than a signalized intersection in Australia, Belgium, New Zealand, the United States, the Netherlands, Norway and the United Kingdom. Injury reductions range from 25%-74%. The Region of Waterloo in Ontario has been installing roundabouts for over 10 years and has extensive data on their performance compared to the more traditional signalized intersection. Waterloo has monitored the average "Injury Collisions per year at Intersections converted to a roundabout" and noted a 70% reduction.

Are roundabouts safe for pedestrians?

Roundabouts are generally safer for pedestrians than traditional intersections. Pedestrians would cross the roadway only one direction of traffic at a time. Crossing distances are relatively short, and traffic speeds are lower than those encountered at traditional intersections. Single-lane roundabouts have been reported to involve substantially lower pedestrian crash rates than comparable intersections with traffic signals.  Pedestrians should watch for gaps in the traffic and choose a safe time to cross.

The Region of Waterloo has also noted a reduction of collisions with pedestrians at roundabouts.  As an example; data collected between 2007 & 2011 shows:

Are roundabouts safe for cyclists?

The way cyclists operate through a roundabout depends on their degree of comfort and experience level with riding in traffic. More experienced cyclists may choose to circulate as a vehicle, merging into the travel lane before the bike lane or shoulder ends. Less experienced cyclists can dismount their bicycles and use the roundabout like a pedestrian would.

Is the cost of constructing a roundabout more than a traditional intersection?

How do I find out more about roundabouts?

There is a great "Safer Choice" roundabout video posted on YouTube:
http://www.youtube.com/watch?v=uhHzly_6lWM

The Region of Waterloo in Ontario has a good presentation available at:
http://www.regionofwaterloo.ca/en/gettingAround/roundabouts.asp

How do I drive in a roundabout?